In “core stability from the inside out”we established that proper core stabilization is generated through the diaphragm’s dual function of respiration and postural support. Kolar et al (7) (8) and many others (see references for “Core stability from the inside out”) have shown that the diaphragm is an important muscle for postural stabilization, and also that it is under voluntary control and can perform its respiratory function and postural tasks simultaneously.

It was not that long ago when the diaphragm almost never even got mentioned in the discussions of core and core-stability training. There are still many “experts” who give advice regarding core-stabilization but completely fail to mention the diaphragm. There has however, been more frequent mentioning of diaphragm breathing lately. Unfortunately it often only gets added to exercise prescriptions as final comment of “make sure to maintain diaphragm breathing while exercising”.

What is diaphragm breathing?

You cannot avoid using your diaphragm when breathing even if you try to! All breathing is performed by the diaphragm whether you want to or not unless there is a medical condition preventing you from using it. The diaphragm is responsible for about 80% of all the respiratory work in normal tidal breathing.

The diaphragm is a dome shaped muscle separating the thoracic and abdominal cavities. It has a non-contractile central tendon (arcuate) from which muscles radiate caudally and outwards to insert into the inner aspect of the lower ribcage. The costal diaphragm inserts into the xiphoid process and the inner surface of the 6 lower ribs and costal cartilages. The crural fibres span from the arcuate ligament and insert into the bodies and discs of the upper lumbar vertebrae. The right crural diaphragm inserts into L 1-3 vertebrae while the left only inserts into L 1-2. The area of attachment (apposition) between the diaphragm and the ribcage is referred to as the zone of apposition (ZOA) which is of great importance for proper diaphragm function.  The zone of apposition is controlled by the abdominal muscles and affects diaphragmatic tension. The diaphragm’s efficiency largely depends upon its position and anatomical relationship with the lower ribcage.

During inspiration the diaphragm contracts and moves down caudally like a piston into the abdominal cavity, which creates a negative pressure in the thoracic cavity that forces air into the lungs and simultaneously increases the intra-abdominal pressure.

The diaphragm is our primary breathing muscle and yet many individuals have very little awareness of how to activate it properly. Dysfunctional breathing patterns are a common contributing factor for low-back pain conditions, and it is actually often a stronger predictor for low back pain than other established risk factors (15).

Is proper diaphragm breathing the same as belly breathing?

Ideal diaphragm breathing expands the lower ribs outwards in a mainly lateral direction. The costal part of the diaphragm (ZOA) expands both the lower ribcage and the abdominal wall when contracting (the crural part only displaces the abdomen forward with its contraction directed forward due to its attachments on the lumbar spine). The apposition of the diaphragm to the inner ribcage wall allows for transmission of intra-abdominal pressure to the ribcage, which provides a mechanism whereby the diaphragmatic contraction drives the ribcage outwards during inspiration (16) (11).  Adding to this is the direct outward lifting motion (external rotation) the diaphragm exerts on the ribs at its insertions to the ribcage.

There should be an expansion of the lower ribcage without any cranial movement of the chest, accompanied by a synchronized activity of the entire abdominal wall which expands slightly while controlling the IAP by an eccentric contraction.

Physical and psychological causes of breathing dysfunction can be hard to separate, and dysfunctional breathing can therefore not be simply defined. Whether the cause is postural, developmental, medical or emotional, the presentation is always very similar. Breathing patterns regarded as dysfunctional include upper chest breathing with decreased or absent lateral expansion of the lower ribcage, with a tendency for asynchronous and paradoxical breathing.  During paradoxical breathing the belly is drawn in and the lower ribcage narrows rather than expands during inspiration (13).  Paradoxical movement of the diaphragm has been evaluated using MRI during deep breathing which showed an upward movement of the costal part of the diaphragm when the crural part moved downward during inspiration, and the opposite relationship during expiration.

The ribcage is often stiff and held in an elevated position which externally rotates the ribs and pulls the costal diaphragm fibres from its normal dome shaped position to a more straight and vertical position. This position reduces the zone of apposition and thereby the diaphragm’s contraction. Spontaneous flaring of the lower ribs is often observed. 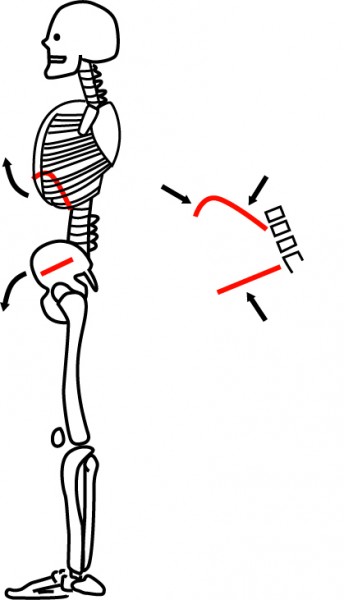 Muscles including Scalenes, SCM, upper trapezius and Pectoralis are often hypertonic and over-developed from the increased vertical movement of the ribcage and elevation of the shoulders during inspiration. The thoracolumbar extensor muscles are hyper-tonic attempting to stabilize the spine in the absence of proper core stabilization.  Every breath involves a shoulder elevation and a back extension. Breathing dysfunction is a common cause for stiffness and pain in the back and neck.

Hyper-tonic abdominals:  If the abdomen is held too firmly by the abdominal muscles the central tendon cannot descend. Instead, as the diaphragm contracts, it pulls cranially on the lower ribcage which elevates and expands the ribs. If the ribs are completely fixed in place by a strong abdominal muscle contraction the breath will entirely be performed with the upper and middle chest. Abdominal hollowing and a too rigid bracing of the abdominal muscles are therefore counterproductive for ideal diaphragm activation to occur.

When exercising, the muscles of the abdominal wall are often heavily recruited during late expiration to force air out of the lungs. This forced expiration lengthens the diaphragm fibres prior to the next inspiration contraction and the diaphragm is thereby able to generate more tension which will increase the inspiratory volume.

Developmental:  non-ideal development during the first year of life affects the stabilization system and often results in postural changes. Signs of developmental abnormalities affecting respiration can be a short stiff chest (baby-chest), flaring of the lower ribs from insufficient activation of the oblique abdominal chains, and a protruding weak abdominal wall often with a diastasis of the abdominal wall present. The high chest position and weakness of the abdominal wall and markedly reduces the diaphragm’s efficiency.
Medical:The end expiratory volume of the lungs has a great influence on the power of the diaphragm contraction and its effect on the ribcage. Conditions like Chronic Obstructive Pulmonary Disease (COPD), emphysema and asthma are often associated with hyperinflation of the lungs where air gets trapped in the lungs. Hyperinflation results in a shortened diaphragm with decreased dome curvature and a reduction of the ZOA (3). Studies have demonstrated that changes in the diaphragm dimensions produced by chronic hyperinflation occur almost exclusively in the zone of apposition. The shortening of the diaphragm decreases its power and efficiency. The diaphragm fibres attaching to the lower ribcage end up in a transverse orientation (low flat diaphragm) rather than vertical, and the lower ribs shift from their normal oblique position to a more horizontal direction. When the diaphragm contracts during such circumstances it is unable to lift and widen the lower ribcage and instead the lower lateral ribs are being pulled inwards during inspiration (Hoover’s sign (5)). Hodges et al (4) showed that during respiratory disease the co-ordinating function between the diaphragm and the transversus abdominis was reduced. Heart disease also commonly affects the breathing pattern.
Emotional:Psychological and emotional states often alter the respiratory control. Fluoroscopic studies show that in situations of tension and emotional stress the diaphragm shows signs of hyper-tonicity by becoming flattened and immobile.
Dysfunctional breathing is shown to be present in 11% of the normal population, in 30% of asthma sufferers and 83% in people suffering from anxiety (1).
Increased respiratory demand alters the breathing pattern and often reduces the respiratory muscles ability to perform their postural duties (4).

As mentioned earlier, proper diaphragm breathing allows the diaphragm to perform its respiratory function while simultaneously providing stabilization support for the spine by an increased intra-abdominal pressure (core). Properly synchronized diaphragm breathing also improves the ventilation of the lungs by increasing the inspiratory volume, which increases the level of oxygenation of the blood since the lower lobes expand more, and the majority of the blood sent to the lungs goes to the lower parts. There is a mechanical effect on the organs in the abdominal cavity when they get pushed downwards during diaphragmatic inspiration - Dysfunctional chest breathing is shallow and mainly expands the top part of the lungs. The posture improves when the lumbar spine properly supported by a sufficient IAP and no accessory muscles (neck, chest and back) are being recruited as in the dysfunctional breathing patterns.

Core stabilization starts with proper function of the diaphragm!