Core stabilization is generated by proper activation of the diaphragm, but it is not as simple as just breathing. Controlling the diaphragm’s dual functions and adjusting its activity levels accurately requires practice.  Take charge of your “Diaphragm Control Switch”.

The secret of core-stabilization is to activate and control the diaphragm’s dual functions and then adjust the level of activity depending upon the required task.

I’d like to illustrate this graded activity by the use of a “Diaphragm Control Switch”. 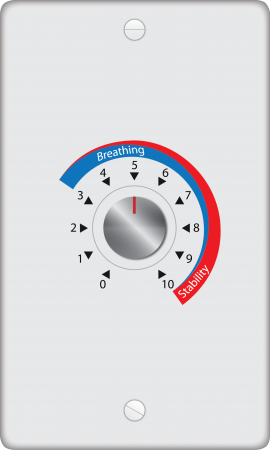 Level 0-2 Represents dysfunctional diaphragm activation where not only insufficient spinal stabilization is provided, but the respiration is also impaired. It has been shown that Paradoxical breathing (chest breathing) does not create a full expansion of the lower parts of the lungs, which greatly reduces oxygenation.

Level 3 – Marks maximal respiratory function of the diaphragm with only a small stabilization activity. This is the level where people should spend the majority of their time. Breathing is greatly improved compared to the dysfunctional levels , and the stabilizing function of the diaphragm is at their disposal. To instantly increase stabilization the only thing required is to voluntarily push the diaphragm downwards while still maintaining the breathing function. An athlete might play a sport at Diaphragm level 3 and push the diaphragm down to level 7 when extra stability (eg going in for a big tackle) is necessary. The breathing function is slightly impaired at this lowered position.

Level 10- Representing the maximum contraction of the diaphragm, at Level 10 the respiratory function is greatly sacrificed and the stabilization function is at maximum capacity. This where power-lifters take a deep breath in and push very hard against every section of the lifting belt when performing a maximum lift. When breathing out again the stabilizing function diminishes slightly.