Is there a call for new research?

"I am not disputing previous research I am only stating that I am not convinced by the conclusions."

The study (1) that has scared people off from performing flexion exercises like abdominal crunches was performed on pig-spines wrapped in plastic without any support from a sufficient intra-abdominal pressure. Repetitive full range flexion was causing the disc damage and the conclusion was made that we have only got a certain number of full flexion cycles in our spine before it breaks.

Hodges (4)performed a phrenic nerve stimulation study of the diaphragm which showed that the resulting increased intra-abdominal pressure caused an extension motion in the lumbar spine.

Cholewicki and McGill (2) performed a fluoroscope study of power-lifters which showed them able to maintain their lumbar segments 2-3 degrees from full flexion even when performing heavy lifting. The ability to keep the spine out of danger was credited to their motor-control. I am sure motor control had a lot to do with it, but I would like to give some credit to their ability to create sufficient intra-abdominal pressure and thereby protecting the spine.

It has been documented that power-lifters and weight lifters (5) have hyper-trophy of their diaphragms and can generate a much greater transdiaphragmatic pressure. Even exercises like biceps curls and sit-ups have been shown to strengthen the diaphragm (3).

This is a call for some new research.

What difference would the proper activation of the core from the inside out via a synchronized diaphragm contraction have on the flexion range when exercising?

I would like to see a new study “crash-testing” the loading of the spine in flexion exercises but this time have the air-bags fitted (intra-abdominal pressure) which would prevent full flexion to occur.

I am not recommending people to start performing flexion exercises again; all I am saying is that I am not convinced they are as harmful as currently thought.

Am I doing some flexion exercises myself? Yes I am because I know I can generate a very strong IAP after working with DNS stabilization principles for the last 10 years. The secret is to avoid full flexion by developing a strong core from the inside out. 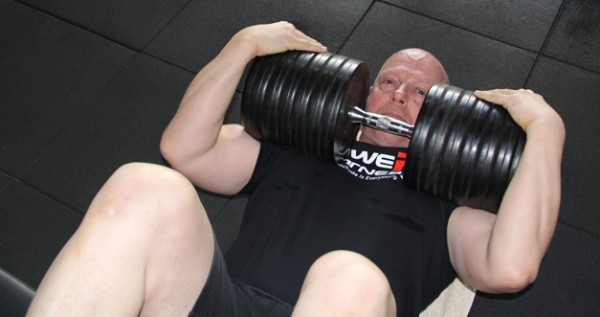