During the recent DNS-Advanced course in Prague I was fortunate to once again participate in a lecture about Viscero-Vertebral patterns held by Petr Bitnar. Petr is not only a great and very entertaining lecturer he is also a renowned researcher. Petr Bitnar together with Pavel Kolar et al (1) has studied the effect of proper diaphragm activation in treatment of GORD/GERD. (Depending upon the spelling of the Structure-oesophagus or esophagus- the condition is called GORD or GERD).

The oesophagus is the tube that connects the throat to the stomach. Food is pushed down the oesophagus by a series of muscle contractions. Gastro-Oesophageal reflux means the return, or reflux, of the stomach’s content back up into the oesophagus, which can eventually damage the oesophagus as it ends up being regularly bathed in stomach acid. This is a very common condition, as it is now estimated that 15-20% of the adult population regularly experience symptoms of gastro-oesophageal reflux.  When the condition takes on a chronic prevalence it is referred to as GORD. The severity of symptoms can vary from person to person and may include bleeding of the oesophagus, vomiting of blood, respiratory symptoms of wheezing and coughs, and Barrett’s oesophagus where there is an increased risk of cancer due to a change in the cells lining the oesophagus.

Traditional treatment of GORD includes life-style changes like weight-loss, reducing food serving sizes, avoidance of certain foods and alcohol, and the use of antacid medication.  In some cases surgery is performed that is aimed at tightening the junction between the oesophagus and the stomach to reduce the amount of acid that enters the oesophagus.

And now for a completely drug-free solution-

An alternative method for the treatment of GORD

The diaphragm is not only the main respiratory muscle and a crucial part of the stabilizing system of the spine, it also fulfils a lesser known function as an external lower oesophageal sphincter.

Dysfunctional diaphragm activation opens the lower oesophageal sphincter during inspiration.  Petr Bitnar showed a video taken during gastroscopy that clearly demonstrated the difference in sphincter activity between proper abdominal breathing compared to dysfunctional chest breathing. The video showed that during ideal diaphragm activity the sphincter remained closed, preventing the stomach contents from re-entering the oesophagus. However, during dysfunctional breathing, the oesophageal sphincter was clearly shown to open up widely, thereby allowing the stomach contents a passage back up into the oesophagus. 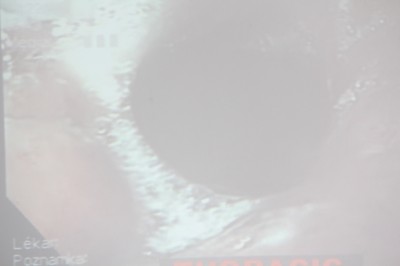 In the study by Bitnar and Kolar(1) it was indicated that there was a significant impairment of respiratory muscle strength (especially of the diaphragm) in GORD patients. A decrease in pressure at the oesophageal sphincter during maximal inspiratory pressure was observed in patients with dysfunctional breathing patterns. There was also recorded an impaired diaphragm activity and defective breathing pattern during normal respiration by Manometric examination.  Conversely, the majority of the dysfunctional findings were normalized during the facilitation of correct abdominal breathing. Additionally, the activation of proper diaphragm contraction was also shown to stimulate an increased contraction of the smooth muscles around the lower oesophagus. The conclusion of this study was that diaphragm dysfunction is evident in GORD patients.

Petr Bitnar further described some postural situations which limit the diaphragm’s ability to contract properly, thereby reducing the sphincter function. There are a group of people with the tendency to tighten the abdominal wall in an attempt to appear slimmer (the hour-glass posture), as well as another group with a large stomach which causes elevation of the chest and anterior tilting of the pelvis, thereby forcing the diaphragm into an oblique dysfunctional angle (the open scissors syndrome). Too tight clothing or belts may also restrict the diaphragm’s ability to contract properly.

A study performed by Austrian researchers (2) showed that practising proper diaphragm breathing for 30 minutes a day for four weeks reduced the acid exposure in the oesophagus and thereby relieved the symptoms of GORD. A follow up after 9 months revealed that those who continued with the exercises had a significant reduction of the symptoms of GORD.

Other studies have shown that:

Summary: The cause of GORD (or acid reflux) is primarily a mechanical imbalance, not a chemical one. The symptoms are not from an excess of stomach acid but from the fact that acid is able to pass back up through the lower Oesophageal sphincter - which is controlled by the diaphragm. A properly functioning diaphragm keeps the acid in the stomach.

Instead of regularly taking antacids, correct the breathing pattern and the acid-reflux will doubtless improve, and may well disappear.

To briefly recap previous posts regarding diaphragm function and testing