In a recent Facebook post, I expressed how pleased I was to see that my description and illustration from 2012 regarding core stabilization, still is appreciated and being used – even by one of the most recognized strength and performance systems in their educational material. Following my post, I have been contacted and asked if I could explain the dual function of the diaphragm in more detail and describe how to incorporate it into regular training.

The DNS concept teaches that proper core stabilization requires the activation and good control of the two functions of the diaphragm.

Before going in to the functions it would be appropriate to start by showing where the concept derives from.

Professor Kolar (Founder of DNS) has together with his colleagues performed two MRI research studies of the function of the diaphragm.

Link to the study:  http://www.rehabps.cz/data/Stabil%20Function%20Diaphragm.pdf

Link to the study:  http://www.rehabps.cz/data/JOSPT.pdf

Following discussions with my fellow DNS Instructor, Richard Ulm, I have added another feature to the original dial illustration. Richard has named the zone of dysfunctional breathing “The zone of Ineptitude”.  The Zone of Ineptitude has been illustrated with the light blue colour (0-2). 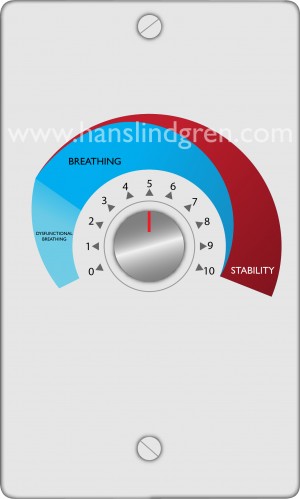 The dial illustration has also been converted into a linear Intra-Abdominal Pressure diagram.

0-3 -The Zone of Ineptitude, represents dysfunctional breathing, where not only the stabilizing function is affected but even the respiratory ability is reduced. Proper diaphragm activation ensures expansion of the lower part of the lungs where most of the gas exchanges take place. In this section, we typically find the chest breathing but even the Belly breathing, which is better than chest but still dysfunctional. 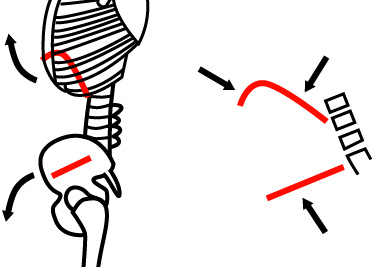 At level 3 on the diagram the maximal breathing demand is met, with the diaphragm properly aligned which also allows it to contract to provide stabilizing when required. 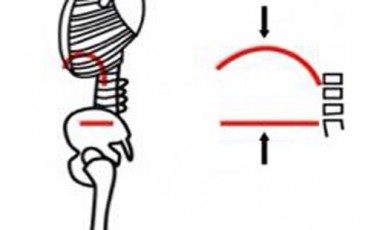 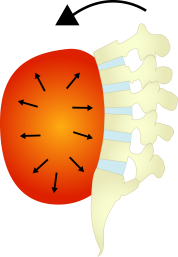 Around level 7 both the breathing and stabilizing demands are quite challenging, and this is where we typically find exercises like loaded carries and other Strongman activities.

At level 10 maximum stabilization is required and the breathing is therefore drastically reduced. It is at this level maximum lifting is performed and by taking a proper deep breath the spine is fully supported by the increased Intra-abdominal pressure. This is often followed by breath holding or just a slight expiration against pursed lips to control the Intra-abdominal pressure.

When training, it is important to adapt the diaphragm activity to suit the activity and its demands.

When running, just the sensation of an expansion of the lower ribcage and the filling up the lower abdominal cavity with each breath is a good cue for maximal breathing capacity. When practising proper breathing it is important to ensure that this expansion occurs in all directions and not just forwards.

At the midrange of the diagram when both the respiratory and stabilizing demands are high the ability to control this dual function is really challenged.  The difference in the ability to control this dual task effectively can easily be seen at Strongman competitions where some athletes almost effortlessly can carry cars and other heavy objects over a long distance, while others really struggle to maintain the stability of themselves and the carried object.

At the end of the spectrum where maximum Stability is required the breathing is going to be sacrificed, so when lifting heavy multiple times it is very important to reset the core stabilization between every repetition. Maximum stabilization is achieved when the diaphragm is fully contracted to become as flat as possible. To maximize the effect of the deep breath in, it is very helpful to fully exhale before breathing in as this will bring the diaphragm into a horizontal position and thereby allow for a more forceful contraction. It is also very important to remember that bracing the abdominal muscles prior to breathing in will reduce the diaphragm’s ability to contract and descend. Bracing of the abdominal wall can be applied after the deep breath in is performed.

In the same way can a lifting belt help the development of IAP, but it should not be so tight that that it will prevent the diaphragm from contracting. Lifting Belts should be fitted to accommodate for a large increase in IAP and only become tight when taking a full breath in.

Summary: It all starts with a good breathing pattern, and most individuals would benefit from paying more attention to how they are breathing. When a dysfunctional breathing pattern is identified effort should first be applied to correct it.

There is a conflict between the breathing and stabilizing functions and they cannot be met at maximum levels simultaneously. When stabilization is the primary focus the breathing will be sacrificed and vice versa. Important to note is that the brain will always prioritize the breathing before stability when challenged, so good general conditioning is important to be able to maintain stabilization of the core.

There are two main areas to address in training:

An effective method to get athletes to appreciate a better breathing stereotype is to instruct them to use proper breathing to quickly recover after demanding tasks.

“If you cannot breathe in a position, you don’t own that position.”