I am proud to introduce a new core exercise-the standing barbell biceps curl!

A frequently used core stabilization exercise is the Plank-exercise. If you haven’t been exposed to it previously I will give a short description: The individual is supposed to lie on the floor face down supporting the body on the elbows and toes. Tensing the abdominal wall to keep the body straight like a plank is said to strengthen the core and there has even evolved a core stabilization test out of this exercise. The test a timed challenge where the ability to remain in this position for a certain period of time is used to evaluate core-strength. One method of evaluating the plank test is a straight time trial in stationary plank position. Another version of testing includes the lifting and holding of limbs for certain periods of time in a specific pattern. Both these testing methods are using quantitative measurements to evaluate core strength. There is never any mentioning of proper joint position, neutral spine, good stabilization patterns and evaluation of breathing. Of course it will exercise the abdominal wall but I do not consider it to be a good core-exercise.

Let us look at an alternative: The biceps curl as a core exercise!

Standing in a good stance with ankles, knees, hips and pelvis in a strong centrated position the lower body is providing a strong functional support for the trunk. The centre of the body is stabilized by a proper core activation including a neutral position of the chest, a firm downwards pressure of the diaphragm while it is still performing its breathing function, activation of the entire abdominal wall and the pelvic floor. The resulting intra-abdominal pressure from this core activation from the front is balanced by the activity of the short and long lumbar extensor muscles at the back. The entire spine is kept in a nice long neutral position. The shoulder-blades are brought into their low stable functional position and the neck is relaxed in a neutral position.

When the elbows are flexed bringing the weight up the core is active keeping the trunk still and the gluteal muscles together with the hamstrings are activated preventing the hips from flexing by the load on the bar.

If the trunk and the hips do not move and the shoulder blades remain still without elevation this so called isolation exercises has turned into a core exercise. I would not call it the best core exercise, but it is much better than a plank exercise without the core activated from the inside out. 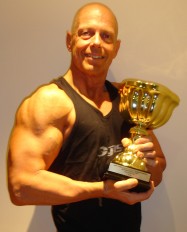