Role of muscles in musculoskeletal syndromes

To understand the musculoskeletal syndromes, from the functional point of view, three stages of understanding can be differentiated:

Evaluation of the musculoskeletal system can be divided into two parts:

In principle, three types of “pathology” of the motor system can be recognised:

In motor disturbances, two types of functional impairment are to be considered:

Motor system functions as one entity.  One of the basic presumptions of our concept is that the motor system functions always as one entity. Any lesion located anywhere is immediately reflected by adaptative responses in the whole motor system.  Therefore, a strictly localised lesion of dysfunction does not exist.  One of the presumptions of a successful rehabilitation is to slow down the fixation of these adaptive reactions and fixation of impaired movement patterns and pain patterns.  The process of development of adaptive responses occurs at all levels of the motor system and is called centralization.  These adaptive responses may even prevail and be the source of further decompensation, creating a vicious circle.  This is a frequent situation in chronic pain syndromes, in which the original cause of pain can be recognised only with greatest difficulties, if at all.

There are four levels of the motor system at which the adaptive reactions seem to be the most evident:

Regardless at which level the problem starts, the final result is a generalised dysfunction and we speak about the rule of vertical and horizontal generalization.

The muscular level represents perhaps the most exposed and labile part of the motor system. As the main effectors, they must respond quickly to all changes or stimuli coming from the neural structures as well as to changes in the peripheral part, i.e. from the osteoacticular systems and skin and of course from the viscera.

Muscles should not be considered as a homogenous “flash” because all striated muscles are composed from fast and slow twitch fibres.  It has to be accepted that in man, different muscles behave in different ways.  Although it does not seem to be a histological correlation, clinically two types have to be differentiated: those prone to develop tightness and those prone to develop inhibition and weakness.  The changed relationship between these two systems results in a muscle imbalance with typical clinical consequences.  Muscles imbalance is therefore considered as a systemic reaction of the muscle system.

The most important signs of impaired muscle function which should be considered in relation to the musculoskeletal disorders are: the increased muscle tone (muscle spasm), muscle imbalance, muscle patterns associated with the joint dysfunction, motor units firing pattern associated with the muscle contraction speed as an important factor to prevent injuries of the joint system.

Increased muscle tone is considered as an important factor in the genesis of pain in the locomotor system.  It is believed that a joint dysfunction results into a painful condition only in presence of increased tone in a muscle which is related (anatomically or functionally) to that particular joint.  Terminology, pathophysiology and treatment of muscle hypertonicity are vague.  From the clinical point of view, however, at least five types of increased muscle tone would be differentiated and this should be taken into consideration in treatment. These different types are: limbic, segmental (spinal cord), uncoordinated contraction resulting in trigger points, pain irritation and muscle tightness, which is associated with altered elasticity and changes of the connective tissue and results into muscle imbalance.

Muscle imbalance is a systemic change of quality of muscle which results into altered biomechanics and is associated with a gradual alteration of movement patterns.  Muscle imbalance has to be considered as one of the important factors which perpetuate recurrences and chronic pain syndromes.  In short, muscle imbalance can be described as an altered relationship and balance between muscles which are prone to tightness or inhibition.

The main consequences of imbalance between the two systems are: uneven distribution of pressures on weight-bearing joints as a presumption for dysfunction, pain and later on probably degeneration, decreased ROM and compensatory hypermobility, altered proprioceptive information followed by adaptive regulatory central nervous regulation (reprogramming). 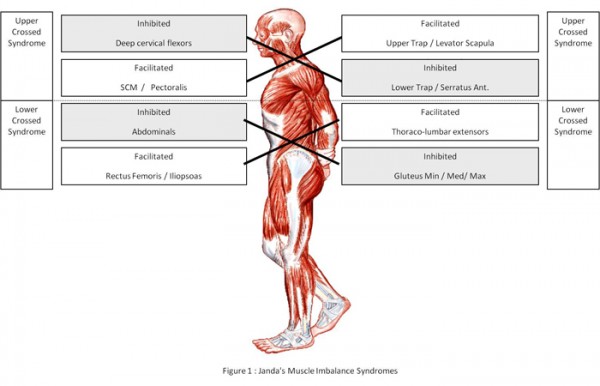 In addition to these two syndromes there is the later (stratification) syndrome which in principle is a combination of both crossed syndromes.  It is a sign of an altered shape of the muscular system due to a long lasting dysfunction and is a sign of a bad prognosis.

Movement patterns and their evaluation is more important than estimation of muscle strength of individual muscles.  The importance of inhibited and weakened muscles is not in their individual strength but rather that their activation is less and delayed.

In evaluation of movement patterns, the main concern is paid to timing (sequencing) of firing of muscles and degree of their activity.  Muscles which are activated during a particular movement should be considered as synergists for the particular movement as they get activated in a mutual interplay.

There are six basic movement patterns which give quality information about the function of the motor system of the particular subject.  These movements are: hip (hyper) extension, hip abduction, curl up from supine, head flexion, push up and shoulder abduction.

The final goal of the therapeutic plan is to achieve the best possible movement patterns as a best possible prevention of recurrences of acute pain episodes.

The treatment proposal can be split into 3 basic steps:

Improvement of function of possibly all peripheral structures which show any kind of dysfunction, regardless whether painful or painless, as any dysfunction has to be considered as a source of impaired proprioceptive information.  Based on the concept of motor learning, adequate information is essential to normalize the whole motor regulation.

Improvement of muscle imbalance as a presumption for improvement of the biomechanics.  Treatment of tight muscles (stretching) should precede strengthening as tight muscles are not only readily activated but activated even during movements in which they should be silent.  Therefore in presence of tight muscles it is impossible to strengthen specifically weakened muscles.  This is one of the explanations why – if this rule is ignored – an exercise program fails.

Improvement of central nervous motor control, programming and improvement of motor units firing pattern in an attempt to speed up the muscle contraction and thus to improve the muscular protection of joints to prevent their injury.  This in principle can be achieved in three ways, namely by