When asked which muscle is the most important in providing scapular stability I am sure most people would think of the Serratus anterior or the mid and lower Trapezius.  I would probably have done the same before I started to study with Pavel Kolar in the DNS program.

My answer to that question would now be the Diaphragm.

The stabilizers of the scapula, as well as all other muscles, need a fixed anchor point to pull towards. That anchor point in this case is the ribcage and the “core” all stabilized by the diaphragmatic contraction. The lower lateral ribcage acts as an anchor point for the serratus anterior muscle when providing scapular stabilization.  Testing scapular stabilization prior to evaluating the diaphragm function would give a false positive result. Proper diaphragm function together with activity of the entire abdominal wall and the pelvic floor create core stability from the inside out through an increased Intra-abdominal pressure.  The stable trunk achieved by proper core activation acts as a central anchor point connecting the forces between upper and lower body and minimizes the loss of strength and power.  Without proper anchor points for the limb movements the force generated is lost in the middle.  The stable core connects the entire body into one functional unit.  It is not possible to generate full power in upper limb movements if the force from the lower body cannot be transferred through the stable yet flexible core and vice versa.

The individual is positioned “on all fours” (on hands and knees). Instructions are given to slowly move the trunk further forward towards the head end. Insufficient stabilization will show up as of winging of the shoulder-blades (The picture is from the DNS program). 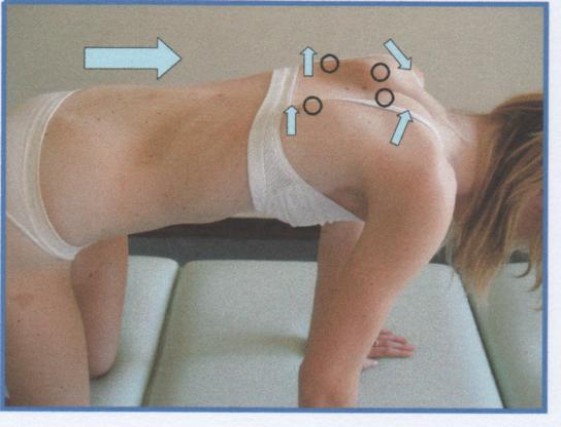 The Diaphragm’s stabilization effect on the scapula can be demonstrated by activation of proper diaphragm breathing, to develop an increased intra-abdominal pressure, which will decrease the winging of the shoulder blades.  By instructing the individual to push the diaphragm further down into the abdominal cavity while still maintaining normal breathing, the anchor points for the scapular stabilizers are further facilitated and the scapular stability will improve. Correct activation of the core by an increased intra-abdominal pressure can be assessed by placing fingers at the lower lateral abdomen, just above the groin. There should be an even expansion of the entire abdominal wall with a firm pressure generated in the lower abdomen.

If someone cannot stabilize their shoulder-blades properly in an all fours position even after the activation of the core and a proper centrated positioning of the support, all exercises in this position should be avoided.  Push-ups and all other activities performed in this position will not improve the dysfunctional stabilization. Instead, the individual has to be placed in a less demanding position where proper stabilization can be achieved.  Changing the position (so for example the support is on the inside of the elbows instead of the hands), is one method to decrease the demand of the scapular stabilizers. Exercising has to start in a position where the stabilization is sufficient and slowly progress back up towards positions with higher demand as the individual improves. The quality of stabilization is the limiting factor which determines what position and load can be used when training. No exercises should ever be performed with insufficient stabilization because it will not only be fruitless, but will also reinforce the faulty pattern and will often lead to over-load injuries.

All testing of stabilization and movement patterns should be preceded by testing and activation of proper diaphragm function and development of sufficient intra-abdominal pressure.

Here is one easy yet very effective exercise from DNS to activate scapular stabilization: