Back pain is now the leading cause of disability in the world and the problem is expected to keep growing in the future.  One commonly suggested solution is to better bridge the gap between evidence and practice. I would like to suggest that there is another important gap that must be bridged - the gap between the different professions involved in treating and preventing back pain.

Most professions are steadily evolving as a result of new discoveries, research and internal and external demands. The back-health professions are definitively no exception, rather the opposite.  Not only do the entire health professions change, but new groups are also developing within the different disciplines based on personal interest, exposure to new ideas, and personal experiences. This has led to a situation where the scope of practice often is so wide that practitioners at one end of the spectrum have got very little in common with those from the other end.

Looking at the different health disciplines the divisions within the groups are very obvious:

Chiropractic:  This discipline is split in the following main ways: There is a practitioner- centred way of practicing where the belief is that by adjusting the spine a couple of times a week over an extended period of time problems will be corrected. Then, there are some practitioners who complement their treatments with generic exercise hand-outs. Finally, there are a growing number of chiropractors who practice in a way where the patient’s movement and stabilization patterns are assessed and corrected, with exercise regimes then designed based on the individual’s need.

Physiotherapy: Again, there is a great divide between the tissue-treating practitioner that greatly depends upon ultra-sound, Tens machines, massage etc, and the Physiotherapist that assesses the patient’s functional movement patterns and then designs an exercises strategy to activate proper stabilization and correct movement dysfunctions

Medicine:  There are vast differences in the approaches between a Doctor who mainly prescribes anti-inflammatories and pain-relief for over-load injuries, and the practitioner who looks at the whole picture and either prescribes exercises or refers the patient to someone who will. There is a growing movement away from excessive surgery and medication towards a more functional approach.

Trainers (Exercise professionals) should also be added to this list: There are still many trainers that are only using basic standardized protocols for strength, power, and flexibility. These out-dated coaches are also often of the opinion that sports-medicine personnel working with functional training theories are just interfering with the “real training”. There are however, a new breed of coaches who realize that stabilization and function not only rehabilitate and prevent injuries but also improve sports performance. Athletes are individually assessed and dysfunctional patterns are corrected in a close working relationship with the sports-med staff. 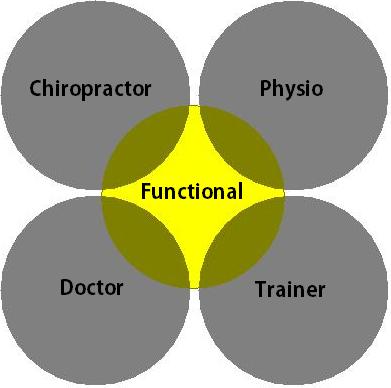 Put all the Back professions side by side and there is a new group emerging that bridges the gap between the different disciplines. The practitioners in this new group often have more in common with each other than with many Colleagues within their same profession.

One major thing this new group has in common is the functional approach where individuals are tested and assessed, after which programs are designed to specifically activate proper stabilization and to correct dysfunctional patterns.  In this functional group of practitioners, all speak the same therapeutic language and can see the value of each other.  Imagine the results Medical Practitioners, Chiropractors and Physiotherapists etc would have if working closely together along the same ideas and with open communication.  If we also add properly educated trainers and coaches to the equation all the pieces would fit perfectly together.

Why has it then been such a break down in the collaboration between the professions?

I think the answer is that we have a tendency to look at the same problem differently when it involves ourselves. If negative comments are heard about another profession it is assumed that that is the way that entire profession practices, but when similar comments are made about our own profession it is the simply individual practitioner who is at fault.

Practitioners will only come in contact with the failures of the other professions – patients who seek alternative treatment.  The majority of individuals may be satisfied with their treatment and stay where they are. It is important to recognise that there are good and bad practitioners in each field.

There have recently been publications discussing the treatment of back pain and pointing out how ineffective the current approach is. Reading that, it is important to realize that our own professions are part of that ineffective model, and it is probably timely that each profession do an internal audit and decide how it best can contribute to the enormous task of preventing and treating back pain.

All practitioners who recognize the importance of functional movement patterns will also know that people are supposed to move the same no matter what profession they are assessed by.

Together we must start assessing and educating people on how to improve the way they move. There will always be a need for treatments, but that should not be the first line of defence - rather implemented when the prevention program fails. The aim of the treatment is to get people out of pain and then restore functional movement patterns. There is no point assessing someone in acute pain, as there are protective patterns affecting the way the individual moves.

In these recent studies it has been pointed out that most back pain will disappear by itself in 6-8 weeks, but there is a large high tendency for recurrence. All of us recognizing the importance of functional movement patterns know that the reason the problems recur is because the dysfunctional movement patterns which caused them in the first place have not been addressed.

The late Professor Janda (Czech Neurologist) emphasized the importance of clearing a movement dysfunction prior to the 6-week mark, where centralization of the pattern occurs in the Central Nervous System and the dysfunctional pattern risks becoming a fixed program. The main task in treatment of acute back episodes is therefore to prevent them from becoming chronic problems. Approximately 5% of the individuals experiencing acute back pain risk turning into chronic sufferers, and these few percent are responsible for a large part of the cost incurred from back pain.

Over the years I have had several opportunities to work in teams with Doctors, Chiropractors and Physiotherapists, in both Sports and Company health care scenarios. I know we can complement each other well and become very efficient in providing the best possible care to people, all we need to do is start communicating with each other for the benefit of our patients. It is time for some real TEAMWORK!