The importance of muscle dysfunction in various pain conditions of the locomotor system is widely accepted. The quality of muscle function depends directly upon the Central Nervous System activity. The tendency for some muscles to develop tightness and others to be inhibited and weak is known and plays a large part in the evaluation and treatment of various pain syndromes.

The decrease of activity of some muscles is often considered to simply be muscle weakness without recognition that this decreased activity and resulting weakness may be due to altered movement patterns, and specifically due to an inhibitory phenomenon related to joint dysfunction and the resulting altered sensory afferent signalling.

In the nervous system there are constantly occurring processes of excitation and inhibition which substantially affect the function of any part of the body. There might be an inhibition based on altered reciprocal interaction due to the activation of an antagonist muscle in spasm or directly from the pain of the muscle spasm. Pain leads to alterations of movement patterns and can thereby affect the activation of individual muscle groups. Change of movement patterns is the result of long lasting dysfunctional proprioceptive signalling.

There is strong evidence that impaired function of muscles occur in close relationship with the development of joint dysfunction. It has been shown that certain muscles tend to deteriorate in their function, which can clinically be demonstrated by three main syndromes:

An important fact that has to be considered is that input that normally would be considered can instead have an inhibitory effect on Pseudo-paretic muscles. This can be demonstrated where the muscle is forced to work against resistance, which generally is considered as one of the most facilitatory techniques, as the number of activated motor-units increase in proportion to the magnitude of resistance. Pseudo-paretic muscles can however react completely differently by showing a decrease in activity with increased loading. This has been explained to be due to a direct inhibition of some motor-units due to over-load or simply by elimination of the pseudo-paretic muscle from a certain movement pattern and its replacement by non-inhibited and sufficiently strong muscles.

The decrease of tone, strength and elimination from movement patterns do not affect all muscles, but predictably only some groups. The following muscles have a tendency to develop Pseudo-paresis: Tibialis anterior, Peronei, Vastus Medialis, Long thigh adductors, The gluteus muscles (maximus, medius and minimus), abdominals, the lower stabilizers of the scapula (Rhomboids, Serratus anterior,  lower  and middle trapezius), and the deep neck flexors.

Altered joint function (movement restriction or decrease of joint play) is one factor which dramatically changes the quality of the muscles which cross the particular joint. Even though it seems that joint pain quickens the development of inhibition, pain does not necessary precede inhibition. The altered proprioception from the joint plays a more important role, influencing the muscles either by inhibition or facilitation.

A study by Professor Janda showed that in subjects without any painful conditions of the locomotor system, those who had Sacro-iliac dysfunction there appeared to be a striking hypo-activity of the Gluteus maximus and medius during hip extension and hip abduction.

The effect of antagonistic muscles should not be neglected as it has been shown that tight muscles evidently have an inhibiting effect on their antagonist (Sherrington’s law on reciprocal inhibition). Stretching and restoration of normal length of tight muscles reduces the inhibition to the pseudo-paretic muscle to improve their activity.

Proprioceptive input from blocked joints give altered information to the CNS, which changes the program on the cerebral cortex level. If the proprioceptive alteration persists for an extended period of time it leads to a centralisation (reprogramming) of the dysfunction, which makes it harder to restore the ideal function. Any joint dysfunction should therefore be treated to avoid centralisation of the problem. Joint blockages are usually painless unless there is a muscle reaction (spasm).

A blocked S/I joint inhibits Gluteus Maximus and facilitates activity of the Psoas and Piriformis muscles on the side of dysfunction. On the opposite side the Gluteus medius and minimus are inhibited which leads to a pelvic shift towards the non-blocked side. A dysfunctional S/I joint often causes a spasm in lower quadriceps and Rectus Abdominis. The gait mechanism alters due to the limitation of end range of hip extension, and the reduced hip movement gets compensated for by an increased anterior pelvic tilt which increases movement and stress of the lumbar spine. The Gluteal inhibition is also often compensated for by increased activity of the ipsi-lateral hamstrings and the contra-lateral back extensors. No muscles cross the sacro-iliac joint, but the Piriformis attach to the sacro-tuberous ligament and so does the long head of the biceps Femoris.  It has been shown that patients with S/I joint dysfunction had delayed activity of the Gluteus max, multifidus and internal obliques on the affected side when tested in a one-leg stance position.

Professor Janda showed a quick and simple screen for Gluteal inhibition related to S/I joint dysfunction. With the patient prone the examiner stands at the head end of the table and observes the contour of the buttock muscles. The side with the S/I joint dysfunction appears flatter and much smaller. 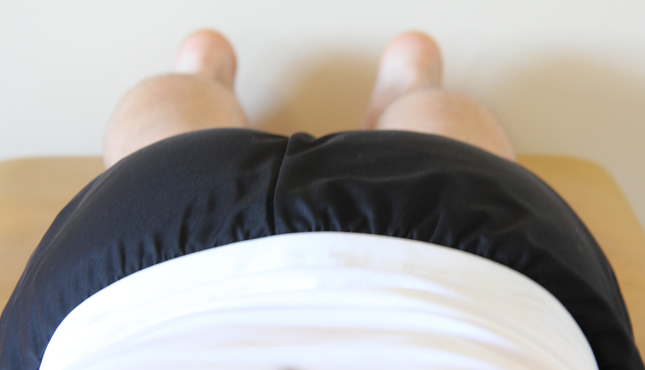