Anyone who has read my previous blogs would know that I am not a big fan of the plank exercise. The plank has for some reason almost taken the "pole-position” in the core training world, however the downfall with most individuals planking efforts is not only that it is a fairly non-challenging exercise if they have learnt to activate the core from the inside out, but with poor form it also creates excessive and unnecessary loading of the shoulders and lower back. There are actually very few individuals I have seen performing their planks correctly.

To add more challenge to the plank exercise a version called the long lever plank has been introduced. Moving the elbows above in front of the head and thereby spreading the support points further from each other will increase the demand, and if performed correctly is a much better option to the traditional version.

The DNS program introduces a planking position which not only is more challenging but also is very functional.

This exercise is developed out of one of the “facilitation positions” in the DNS program.

Start by lying on the stomach in a position where the support is on the elbows at the same level as the ears, the medial side of the knee on one side and the thigh on the other side. The head is initially turned to the side with the thigh contact. I prefer to set this exercise up in a completely functional pattern straight away by making sure that the axis through the girdles (shoulder and hips) are in a contra-lateral pattern (converging) 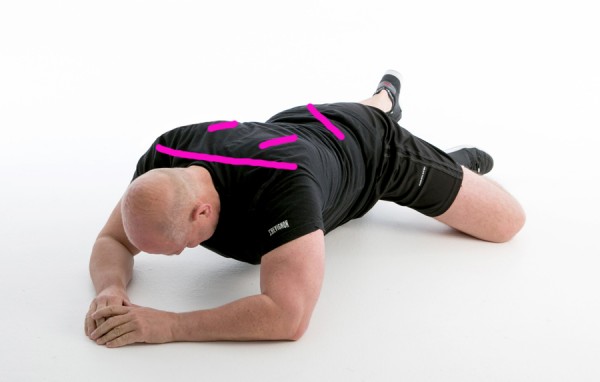 The individual is then instructed to lift their torso off the ground by supporting on the inside of the knee on one side and the elbow on the other side. Emphasis is on elongating the spine by keeping it in a neutral position while maintaining the shoulder on the support side in a centrated position.

As ability increases, progressions of this exercise include lifting the non-supporting arm off the ground, moving it around, and later even introducing resistance to movements of that arm with the use of a Theraband. Moving the neck in flexion extension and rotation from the T4-5 level is yet another variant of progression.